“We know our world can change really fast. That’s what climate disruption is going to be like”

The coronavirus has shown us just how quickly things can change. In his new book, cleantech investor Tom Rand says we have the tools we need to address climate change — we just need to use them. Register here for an online chat on April 15 at 12:30 PM EST to hear more and listen in real time.

Tom Rand has long been fighting for a carbon-free future from multiple fronts. He co-founded and is the managing partner of cleantech investment firm ArcTern Ventures, he helped bankroll and retrofit Planet Traveller, Toronto’s greenest hostel, and he has written several books on climate change. With his latest book, The Case for Climate Capitalism: Economic Solutions for a Planet in Crisis, he presents a compelling idea: capitalism isn’t an obstacle to solving the climate crisis — in fact, it’s is the only system that will get us to that solution in time. He argues that the political divide that characterizes our response to climate disruption — on the left, anti-capitalist activists like Naomi Klein, and on the right, free-market fundamentalists like Charles Koch — blinds us to the pragmatic possibilities and mechanisms that our economic system already allows. Focusing on competition and innovation, Rand shows how capitalism can be reformed to be more just, equitable and environmentally positive.

Here, he talks about how his young son changed his life, “woke” capitalism, and how the coronavirus might provide a preview — both good and bad — of our collective future.

You open the book talking about your two-year-old son, Rupert, and conclude with a long letter addressed to him. How did becoming a father change you and the work you do?

I’ve always worried about climate. Before, though, it wasn’t personal to me; it was kind of an anthropological-philosophical problem. I cared about human beings, I cared about the state of the world, but I was one step removed. Now I’m not. On the one hand, it makes it even more terrifying. On the other, it’s like, well, I guess I’m just going to dig deeper, and I’m going to find reasons to hope. I have to. I can’t retire now because my son needs to see me trying to solve this problem when he’s old enough to know what I’m doing. 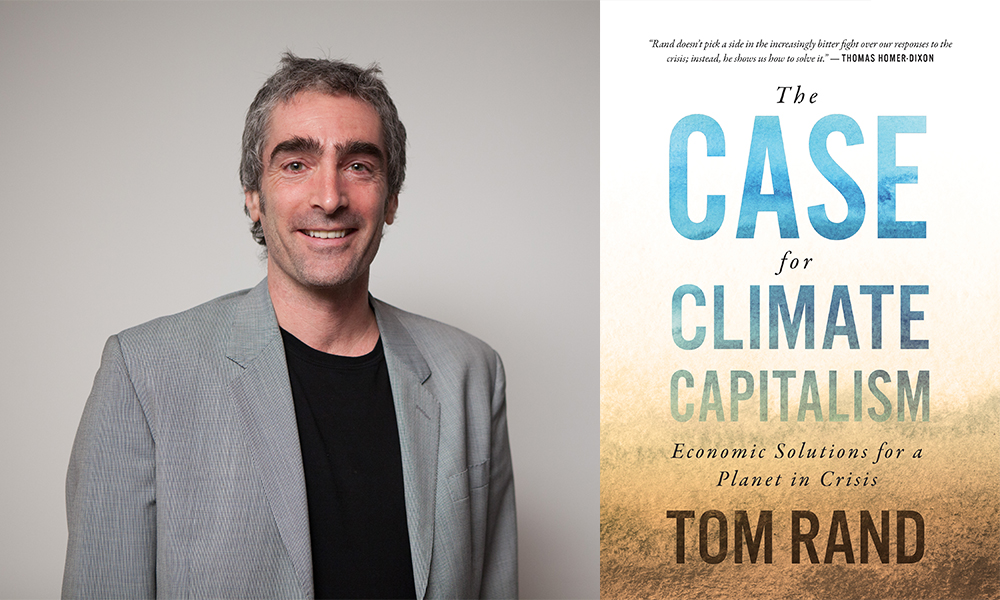 And I assume he’s helped you to redouble your efforts, to work even harder?

For sure, 100 per cent. Redouble my efforts on climate mitigation but also to begin to think about adaptation and resilience. You know, we’re not stopping climate disruption. We’re going to try to mitigate it, to make it less bad, but it’s coming. Going forward, we do have to think about social resilience. Resilience is what my son’s generation will fundamentally deal with. My generation has to deal with mitigation. Our job is to reduce emissions.

You argue that we don’t have time to scrap our current economic system, but need to modify it to be more equitable and decarbonized. Where should we start?

We live in a democracy, and in a democracy we pass laws that define the rules by which business, capital, entrepreneurs operate. So the place we start is from democratic will. We need to construct a set of rules that enable our business leaders and our capital and our entrepreneurs to solve this problem. We need to set up rewards and incentives so that the capital flows in the right ways. And that’s all of our responsibility. And that’s why you can’t throw capitalism out. Because you need to build a big democratic tent. We have to work with people we may not always agree with. You can’t vilify people. We’re all heroes of the story now, all of us.

You explain your disagreements with Naomi Klein very well but you also write “If you want moderate risk, you must endorse radical action.” Do you think maybe that’s what Klein is doing, too? Calling for an economic revolution in the hope of moving the needle at all?

I would like to credit her with that, but she’s very adamant in not accepting compromise. She works against a carbon price if the money isn’t used to build social housing, for example. That’s not building a big tent. And I think it distracts us from the real work, which is compromise. I think we can be more imaginative about what capitalism is. If capitalism is the neoconservative American free market stuff, then sure, I’m 100 per cent in agreement with the criticisms of that form of capitalism.

You’re not the only one advocating for a more woke capitalism. At Davos in January, for example, Salesforce CEO Marc Benioff said, “capitalism as we have known it is dead.” Do you think that sentiment is becoming more common among business leaders?

Not a lot of business leaders are using that language but a lot of business leaders are looking for ways to play a role in the solution. Five years ago, if I had a cleantech solution for a corporate leader, that cleantech solution had to be 10 times better, 10 times cheaper than the status quo —because why else would they change their behaviour? But now, it’s like, all things being equal, they’ll take the cleanest solution. That’s the positive. The negative is, there still seems to be this feeling that we can kind of nibble around the edges and solve this problem. And on this issue, I’m with Naomi. This calls for an absolutely radical approach. What I’m differentiating is politically radical from economically radical. There are ways to intervene in the economy that are deeply radical — like, imagine a thousand-dollar price on carbon that’s revenue-neutral. That is economically radical but has nothing to do with left and right.

One idea you propose that seems completely bipartisan, non-political and simple common sense is using pension funds as an advocate for aggressive climate policy. That seems like an easy sell to me.

It is an easy sell. The challenge is that a pension fund has a single obligation, and it’s run by financial professionals who spend a lifetime making decisions about risk-adjusted returns. What they don’t do is imagine themselves as changing the world in which they find themselves. They operate within a given structure. And no pension fund is big enough to solve this problem. Even a woke pension fund manager who gets climate risk, it’s still not their job to solve the problem. They’re going to short Miami real estate and buy Chicago real estate but they’re not going to go out and build a million wind turbines. So you come back to laws. You still need a set of incentives, laws, rules, that say to them, “Hey, if you build a million windmills, you’ll make more money.” I think they are the actors that matter the most. But even the really good ones like CPP — and they take this problem seriously, they’re at the table — they can’t just go out and build a clean energy economy by themselves.

I was surprised to read about the difficulties facing cleantech. I assumed venture capital was all over it.

There’s a little more venture money around than there was before and that’s a good thing. It was absolutely dead in 2010 when we started ArcTern Fund I. There was nobody doing cleantech because Silicon Valley lost its shirt doing cleantech. But venture doesn’t solve this problem. It’s about scale. I give you the humble heat pump. If you really want to reduce emissions in Canada, retrofit every house in Canada and put in an air-to-air heat pump. I live in a big house, but I put in six heat pumps and haven’t turned on my furnace in three years. But the heat pump was invented a long time ago. The point is: that’s not inventing something, that’s deploying something that’s already invented. Venture can invent new stuff but, ultimately, it has to scale up to trillions of dollars’ worth of deployments. That’s not what venture funds do, that’s what pension funds do. It’s a team game.

Given that we’re living in a crisis that’s transforming, even if just temporarily, the economy and the very way we live, is there anything to learn, in terms of climate, from our response to the pandemic?

I’m encouraged by what I see. I think people are understanding that this is a big risk and they’re doing the right thing. I think there are interesting questions about communal behaviour, the common good and the role of government that we can learn from — that there’s a real role for the government in changing our behaviour for the common good. Maybe it’ll make us more humble. We know our world can change really fast. Well, that’s what climate disruption is going to be like. It may not happen in a week, but it’s going to happen in your kid’s lifetime. I think it might be a wake-up call. We can’t take things for granted anymore, so let’s do the right thing.

Did writing this book make you more or less hopeful?

I don’t know if I could have been less hopeful. I don’t say this in public a lot. But if you talk to climate people, after the second pint, they’re a pretty pessimistic group. Why did I write this book? Well, partly because I wanted to affect the conversation we’re having in this country. But also because I want a written record that I gave this a try. You can’t do something like this without feeling like there’s a point to what you’re doing. Writing the book did make me realize that this is actually a nonpartisan, practical thing that we can do. Just like the coronavirus — you have to do some practical steps and you won’t be in trouble. With climate, there are just a bunch of practical steps that we need to take. We just have to decide to take them.

Transformation: A rallying cry for the planet