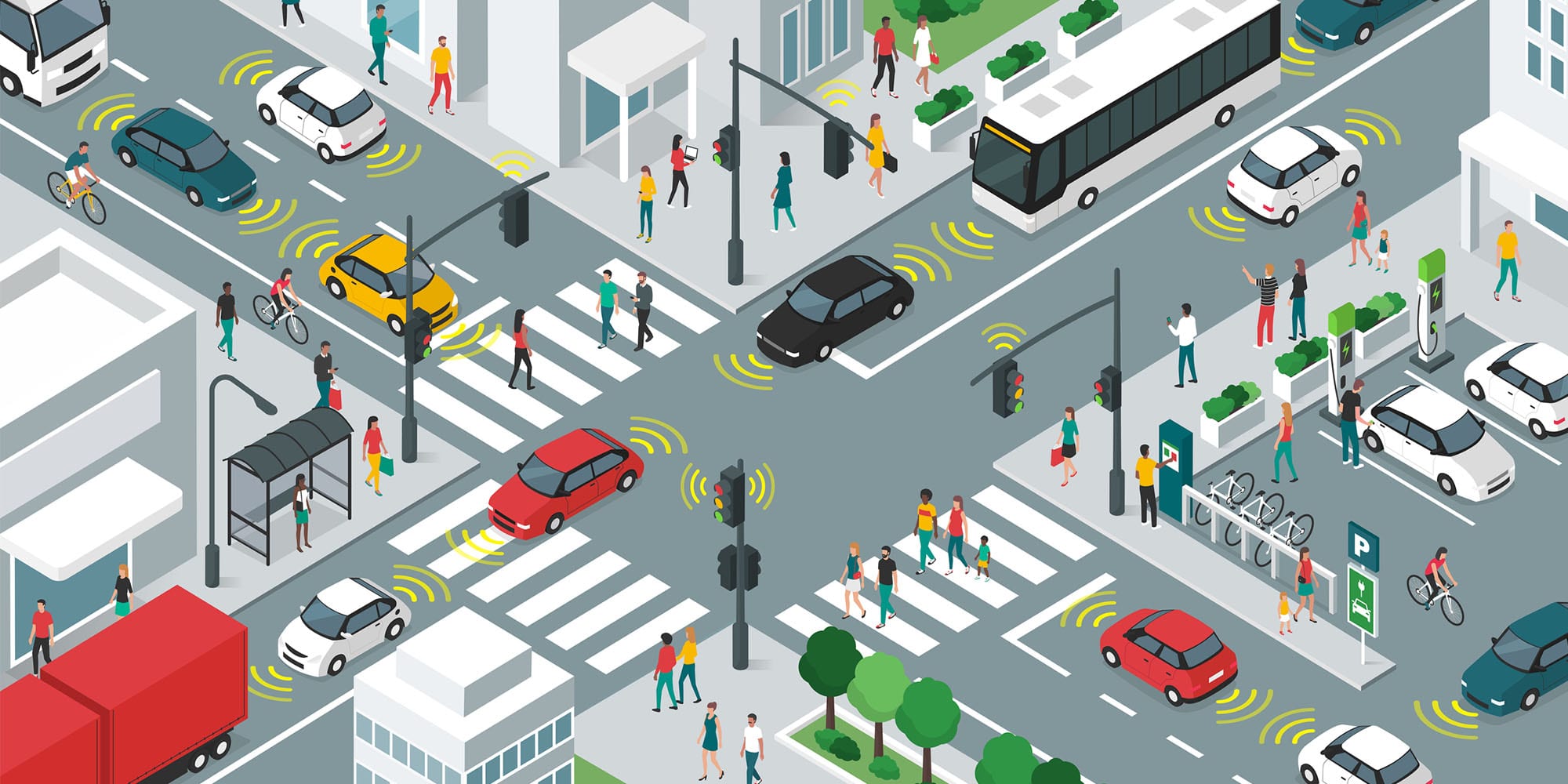 Poughkeepsie, New York, is a city “like most cities in the world,” says Jessica Matthews, founder and CEO of Uncharted Power, a power solutions company that develops integrated infrastructure solutions. With a population of around 30,000 people, the town is on the smaller side. Since its heyday as a shipping port in the 19th century, Poughkeepsie has struggled with debt and serious infrastructure issues. “When there’s a storm, people lose power for days, if not weeks,” Matthews explains.

That’s one reason her company chose it for their first smart city pilot, which will replace existing sidewalks and streets with high-tech versions that contain embedded sensors, single-board computers and power cables. (It’s also her hometown and she wanted to help the city reach its full potential.) These upgraded surfaces will protect power lines and grids from storm damage, which means an end to days-long power outages. But the embedded sensors will also collect data about everything from open parking spots to the status of the city’s underground water pipes, while other cables will transmit broadband internet signals.

Essentially, Matthews is looking to transform Poughkeepsie into a futuristic smart city — but her motivation is very rooted in the here and now. “Millions of students right now lack access to basic internet connectivity, so when everyone shifted to going to school from home due to COVID-19, more than half the students dropped out of school. Dropped out,” she emphasizes. “And those were not the students that were on the south side, which is a little bit more affluent. It’s students from the north side, where most of the Black and brown people in those communities live.”

It’s not hard to imagine the difference reliable electricity and widespread broadband coverage will make in these students’ lives. But overloaded — or wholly insufficient — infrastructure is just one of the fault lines in our communities that COVID-19 has exposed. Communities are also seeing the devastating impacts of a strapped healthcare system, neglected long-term care homes and a weakened social safety net, especially in so-called “high priority” neighbourhoods.

But while experts caution that technology isn’t the only solution to this problem, it can help create more equitable societies. Here’s how.

Technology can play a role in innovative problem-solving

“Technology alone is not a panacea and will not — on its own — empower hard-hit communities. It has to be implemented alongside strategies that focus on connecting people and building community capacity. It has to serve a need,” says Shauna Brail, an associate professor at the Institute for Management and Innovation at University of Toronto Mississauga.

For example, she points to on-demand transit initiatives, which can help improve transport equity for underserved neighbourhoods by making it easier and faster for lower-income residents to get around their city. And she sees potential in apps that make it easier for small business owners to offer online ordering and delivery, especially during the pandemic. Take the City of Toronto’s partnership with food delivery apps Ritual and DoorDash, which allows local businesses to access the services without paying set-up and monthly subscription fees, eliminating one barrier to entry and boosting the amount of money these entrepreneurs actually get to keep.

Cities can use data to fight inequity

Collecting the right data can make a huge difference in the way we fight COVID. We can even track outbreaks using a city’s sewage, Brail says. Here’s how it works: many people who have active COVID-19 infections shed the coronavirus in their stool, sometimes even before their symptoms start, which means when someone with COVID flushes their toilet, the virus enters the wastewater system. Treatment plants are able to measure the amount of virus in a city’s sewage and determine whether the number of infections is falling, rising or staying much the same.

But that points to an obvious problem: when data isn’t being collected or being shared, it’s difficult to make decisions or set policy. “This applies across a number of areas of public interest: from data on physician visits during the pandemic, to shifts in the use of ride hailing services, and to tracking workplace occupancy and virus spread,” Brail says.

It’s also why advocates have called for the collection of race-based data, which is essential if cities are going to understand just how the pandemic has disproportionately affected racialized communities — and make informed decisions on where to place testing centres or how to tweak transit service.

“It’s because of data collection and analysis that we understand there is unevenness in the spread and impacts of COVID, demographically and geographically,” Brail says. “But there are also increasingly new sources of data, often collected digitally through private-sector activities, that can be tapped creatively to identify patterns and inform problem solving.”

There’s just one problem: for a smart city to function the way advocates imagine it can, its citizens must be able to access — and afford — broadband internet. Brail points out that municipal programs that provide low-income households with low-cost internet allow those people to access education, work and community. But “there is no single, simple solution,” she concedes, characterizing those programs, like the Toronto Public Library’s mobile Wi-Fi hotspot service, which allows cardholders to borrow one of 30 portable hotspots for up to seven days, or universities that loan students modems or provide bursaries to cover high-speed internet, as stop-gaps. Any real improvement will require a range of supports from government, public institutions and the private sector.

And it’s not just about the internet itself; it’s also creating an environment where all citizens feel empowered and engaged. This need has become even more pressing during the pandemic.

“It’s not so much that this is a good time to reimagine what a city could be, but rather, a time for cities and urban leaders to take decisive, intentional action so that our cities really are places of prosperity, opportunity and hope for greater numbers of people,” Brail says.

Matthews agrees. “When we think about introducing technology into communities, it should never just be about the technology,” she says. That’s why the Poughkeepsie pilot project includes a program called Uplift, a digital STEM education program that teaches kids about science, innovation and how to invent, even when you’re short on resources.

“We’re teaching them how to view the problems in their community not as obstacles but as opportunities — we’re literally teaching them Human Centered Design,” she says. “Because when we get to the point of saying we want to design what the city should look like, we want these kids to feel like they can be part of that conversation. I think that’s how you really start to move an entire community forward. You can’t just hand marginalized groups the fish, you do have to also teach them how to use the fishing rod.”

Be the disruptor and not the disrupted: How Accenture’s Canada Innovation Hub is helping to transform the country

6 “smart” neighbourhoods that are changing the way we build cities