Good data can help stop climate disasters before they happen 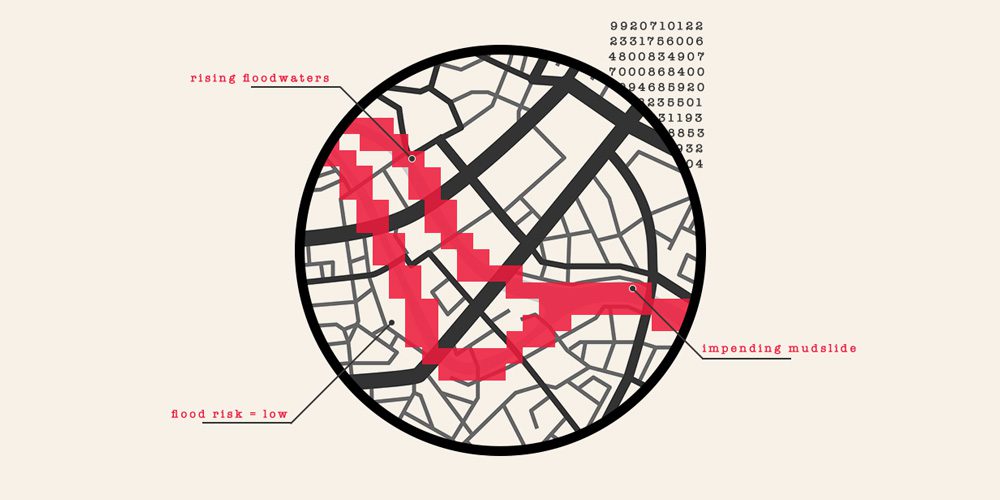 Innovations such as on-the-ground sensors and satellites orbiting the earth are already monitoring the environment and saving lives.

Using globally available data and a methodology developed over 15 years studying links between climate change and resource management, Simonovic hypothesized flood activity for the next 80 years — allowing for different outcomes based on potential climate change scenarios. Ultimately, he concluded, beyond the areas currently under flood risk, another 30 percent of Canada, including parts of Montreal and Vancouver, could be underwater by 2100.

As alarming as this potential future sounds, Simonovic expected the findings to generate modest interest. However, to his “tremendous amazement,” the tool received a whopping 100,000 investigations and more than 11 million visitors within a month. But more important than the sudden swell of interest, he says, was getting the attention of Natural Resources Canada and the insurance industry, which are now hoping to develop and integrate the tool in potential flood monitoring and risk mitigation.

Digital tools like Simonovic’s, however, are only as good as their data sets. And currently, environmental monitoring is expensive as well as time- and labour-intensive. As extreme weather events, such as the recent string of floods and fires in B.C., become more frequent and intense, there is a clear need for better tools to predict, track and adapt to this rapidly changing world.

“Using technology to collect better data will be essential,” says Doron Telem, KPMG in Canada’s new national leader for ESG. “We’ve got the sensors to collect it, the blockchain to secure it and make it trusted, and we can now analyze it like we hadn’t been able to before due to the availability of faster cloud computing.”

In essence, we need to disrupt environmental monitoring and carbon accounting and drag it into the modern age. In taking advantage of such modern and affordable advanced technological capabilities, we will not only be able to get a better snapshot of the state of the climate, but potentially improve quality of life for all.

In British Columbia, the series of extreme climate events that began last summer — with an unprecedented “heat dome” before snowballing into fires, torrential rains, floods and landslides — will forever be marked by the unfortunate loss of life and property. Better monitoring could have prevented at least some of the catastrophic effects of the latter half of 2020, says Jim Vanderwal, director of climate change programs at the Fraser Basin Council, a sustainability-focused non-profit that works across the province.

Vanderwal explains that due to B.C.’s diverse geography and a gradual lack of investment, there are a multitude of microclimates that either still completely lack or have only recently had access to good quality monitoring tools. “This means that there is still very sparse data when it comes to monitoring rainfall and streamflow,” he says. “There’s definitely a link between that and the decisions that were made for emergency management.”

Importantly, according to Simonovic, this issue is not localized to western Canada: “You see the same mistakes repeated over and over again,” he says, “We are permanently behaving as if we didn’t learn anything from the previous disasters.”

But with technology allowing for sensors to be placed widely on buildings and in the environment — collectively called the internet of things (IoT) — more efficient monitoring of everything from air and water quality to evaluating factory emissions is becoming possible. This extends to identifying the more indirect impacts of climate change such as keeping tabs on flora and fauna and observing flood and river levels and land erosion. There is a real chance for technology to become the catalyst to break that unfortunate cycle.

Though it’s still relatively early days, it’s opened the door to ingenuity in the sector. In particular, the adoption of 5G technology has allowed for more effective remote monitoring. At the University of British Columbia, for example, researcher and engineer Nemkumar Banthia has developed a sensor warning system that uses the network to detect flood-triggered mudslides and bridge failures before they happen. In the United States, the National Oceanic and Atmospheric Association is spending $150 million on advanced observing technology to gather key information about coastal, ocean and Great Lakes ecosystems.

Beyond accessibility to more accurate remote data, IoT has also made it possible for grassroots organizations to play a more active role in carbon accounting and advocating for policy changes as urban centres look to adopt smart solutions. A good use case for this can be found in Brooklyn where the Gowanus Canal Conservancyused Temboo, an affordable, easy-to-use platform that captures information from sensors to help monitor stormwater absorption rates to protect runoff pollution from entering waterways. With a lower barrier for use, the Temboo platform and others like it can be used to monitor for everything from gas leaks to energy use at any scale. In turn, creating a more accurate accounting of the micro factors that lead to climate change.

“Thanks to this level of accessibility and affordability, coupled with improved cloud computing power, we can now create a rich, real-time picture of terrestrial environmental monitoring for the first time in history,” says KPMG’s Doron Telem. “Not only does this give us more data than ever before, but the ability to view it collectively.”

In doing so, he says, we can now take targeted action, such as adopting energy-saving innovations and view the results in real time. We can use that data and machine learning to better anticipate the effects of climate change on everything from the supply chain to carbon emissions. And quantum computing has the potential to speed up that process even further.

When considering monitoring the effects of climate change on a global scale, there are limits to such terrestrial and geo-specific tools. For one, they rely on honest reporting from companies that may not be motivated to report all their emissions. And while the recent COP26 conference resulted in resolutions for better global carbon accounting, the implementation of such regulatory changes is still a work in progress.

To address this problem, Montreal-based GHGsat has been using satellite technology to not only monitor emissions but better understand the holistic picture when it comes to mapping the continued effects of climate change.

“Space gives you a unique vantage point to be able to compare apples with apples everywhere in the world,” explains GHGsat’s CEO, Stéphane Germain. “You don’t need permission from a company or a government to measure emissions from facilities, so it provides a ubiquitous, transparent way of looking at admissions all around the world.”

Germain says his company’s technology can fit into a satellite the size of a microwave and measure emissions at an extremely high resolution, “so that you can see things as small as an individual oil well, or a feedlot or coal mines — these are the major sources of emissions in the world. And we can see them all.”

“The final advantage from space, which is a little counterintuitive, is that it’s actually really cost effective,” he adds. “Because you can amortize the cost of your satellite over thousands of measurements over many years. And all of a sudden, you’ve got a really cost-effective service compared to the current way things are done, which is driving people around from site to site with a handheld monitor that costs $100,000.”

The trade-off being that the smaller leaks will still need to be measured terrestrially, using an IoT-connected piece of equipment which could be integrated into the same dataset.

“You’re never going to be able to measure a pinhole leak from space,” Germain concedes. “But the idea is to pick up the larger ones from space on a regular basis at a relatively low cost; complement that with aerial surveys and occasionally do a mop up of all the tiny little leaks.”

According to a report by the World Economic Forum, IoT solutions could help cut carbon by 15 percent “through solutions in energy, manufacturing, agriculture and land use, buildings, services, transportation and traffic management.” That is, to take the vast streams of raw data and use them to improve efficiency and reduce pollution.

However, as technology allows for better data gathering and processing at scale, the question remains how best to implement all this information into verifiable results so as to better predict, prepare for and ideally avert more frequent and extreme weather events.

According to KPMG’s Telem, with an increasing number of governments and organizations pledging to go carbon neutral by 2050 or even earlier, for true progress to occur, there needs to be a way to analyze and validate the deluge of information. That requires sophisticated analytical tools that can uncover patterns and identify new solutions and ways to optimize energy, reduce emissions, and better forecast potential climate disasters, as well as measure and demonstrate impact and value consistently.

For this to happen, Telem explains, it will require the private and public sectors to be more transparent while sharing resources and capital.

“It’s very important to make sure that we have the data and the governance to support the journey and the ultimate reporting to consumers and regulators,” he says, adding that it will likely require the development of internationally accepted standards.

“To have true value, it will require significant cooperation between governments and the private sector,” he says. “In terms of who needs to do what, both sides probably need to do quite a bit, and one can’t do without the other.”

Want to learn more about what it will take to build a sustainable and prosperous planet? Meet the Mission from MaRS Climate Champions.

“We’re the generation that has to deal with the environment”

Should Canadian-born climate companies be owned by Canadians?